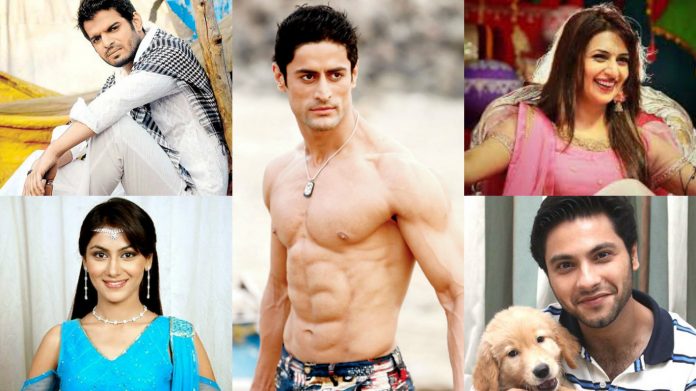 This post is a mid-week motivation for you to work even harder at your workplace. No joking, but when you will come to know about the small screen or the TV actors salary you will be truly shocked. It is not only the Bollywood actors and actresses who are earning skyrocket money, but even the small screen TV industry is the recipient of the fat paycheque.

And let us remind you that these actors and actresses work non-stop for long hours even on weekends, holidays and truly deserve the pay. So their hard work does pay them a fat cheque and be ready to be surprised when you notice the Indian television actors’ salary per episode!

The angry young man of television industry Karan Patel rose to fame due to his successful acting in Yeh Hai Mohabattein and you would be pleased to know that Karan Patel charges Rs. 1-1.25 lakh per episode of YHM, which makes him one of the highest-paid daily soap actor.

He looked smoking hot as Lord Shiva in Devon ke Dev Mahadev and nearly killed every woman with his chiseled physique. He continues doing the same in Chakravarti Ashoka and being a popular Hindi daily soap, Mohit Rana earns close to Rs. 1-1.8 lakh per episode! Worth it, right?

The Gopi bahu of Saath Nibhana Saathiya has been the ideal bahu of television and for her hard work, she is paid close to Rs. 90k per episode.She was played in Bigg boss 13 but due her back injured she was out from Bigg boss house.Devoleena recently announced that she will not return as her back is not up to the mark and doctors were fearing injuries inside the house.

Another highest-paid television actor is the popular face of Mishal Raheja. He is famous for his roles in Laagi Tujhse Lagan, Love Story and Ishq ka Rang Safed. Ishq ka Rang Safed last episode was a few months back and the serial gave him success and a fat paycheque. He was paid Rs. 1.6 lakh per episode.

The sweetheart of television Divyanka Tripathi, who is super famous for her role as Dr. Ishita Bhalla in the popular Hindi serial Yeh Hai Mohabattein for which she earns Rs. 80k- Rs. 1 lakh per episode. In 2018, Divyanka was ranked 94 in Forbes Highest Earning Indian celebs. Her current web series Coldd Lassi Aur Chicken Masala is airing on Alt Balaji.

She has been Ekta Kapoor’s favorite since Kahani Ghar Ghar ki and it was Bade Ache Lagte Hai that rose her to fame and money. She is now seen in the second season of popular show 24 and is paid Rs. 80k-90k per episode. She is even the star cast of the upcoming film Dangal. Sakshi Tanwar will be seen in the web series “Misson Over Mars”.

The winner of Jhalak Dhiklaja Season 6 Drashti Dhami began her career as Geet in the popular family drama Geet: Sabse Hui Parayi. Back in those days, she earned 30-35k per episode and now it is reported that she earned close to Rs. 75k-1 lakh for each episode. She now works for new show Pardes Mein hai Mera Dil. She is coming in “Silsila Badalte Rishton ka”.

Ronit Roy has been a stunner on television and big screen. He has done complete justice to his roles in Kasauti Zindagi Ki, Bandini, Itna Karo Na Mujhe Pyar, Adalat and much more. He is paid Rs.1.5 to 1.25 lakh per episode. He is in Arjun Patiala and his upcoming movie is Shamshera. His new web series Hostages is coming on Netflix.

Anita Hassanandani the hot vamp of television who is seen in the popular show Yeh Hai Mohabbatein is paid Rs.50k per episode.

Shivaji Satam popularly known as ACP Pradyuman of CID earns close to Rs. 1-1.2 lakh per episode making him one of the highest-paid actor of the television. CID is a popular television show that has ruled the small screen industry for decades.

The female protagonist of popular show Kumkum Bhagya, Sriti Jha earns close to Rs. 50k-60k per episode and is one of the popular leading ladies of the small screen industry.

Do let us know how you feel reading about their salary!

A highly successful comedian in his own right. His salary is 10 lacs to 12 lacs per episode of comedy nights with Kapil. He was playing the character of Gutthi on the show. He joined again with Kapil Sharma for The Kapil Sharma Show. Currently he is busy doing movies.

Hina khan earns 2 lakh (per episode) for her current role in the popular soap Kausuti Zindagi kay.1.5 to 2 lakh per episode. She participated in the reality show Big Boss11. She was the first runnerup in 2017.

Ram Kapoor is an Indian television and film actor. He got popularity from Jai Walia television series Kasam Se. He played Ram Kapoor character in “Bade Achhe Lagty Hain”.  Ram Kapoor has worked in a number of movies too – Baar Baar Dekho and student of the year…. He won 3 ITA Awards and 3 Indian Telly Award for the best actor. He earns Rs. 1.25 lakh per episode.

Manish Paul is an Indian television host,anchor and actor. He starting his career as a radio jockey and VJ. He moved to acting before taking stand up comedy and hosting. A successful TV host, Manish paul was is the news …He is getting Rs. 15 million for hosting the entire season of Jhalak Dikhlaja.

Karan Singh Grover is an Indian model and actor. He has known for his Tv show Dil Mil Gayye and Qubool hai. His acting skills can also be seen in movies Alone and Hate Story 3 movies. Now he came back to Kasauti Zindagi Kay As Mr. Rishabh baja He earned 3 lakhs per day. This is making him the highest-paid Tv actor yet in 2019. Karan Singh Grover also made his digital debut with BOSS [Baap Of Special Services].

Karan Mehra is an Indian Tv actor, model, and fashion designer. He is known for playing Naitik Singhania in Yeh Rishta Kya Kehlata Hai. He participated in Bigg Boss 10. He earned Rs.1 lakh per day.

Gaurav Chopra is known as Raghuvendra Pratap Rathore in Uttran. He was the contestant of Bigg Boss 10. He has acted in the Oscar-nominated  Hollywood movie Blood Diamond. He is currently working on a theatrical adaptation od Devdas with Ashvin Gidwani Production [AGP World]. He is working in a new show Aghori. He earned Rs. 65,000  per day.

Jennifer is a very beautiful and talented actress. Jennifer acting debut as a child actor when she was 12 years old in Raja ko Rani Se Pyar ho Gaya. Earlier the actress was being paid Rs. 80,000 to 85,000 per episode but now she increased Rs 1 lakh per episode. She is working in Beyhadh 2 as Maya Jai Singh.

Bharti Singh Limbachiya is an Indian stand up comedian from Amritsar,Punjab India. Now she is working in The Khatra show on colors Tv. She can also be seen in The Kapil Sharma Show. She earned 12 lakh per episode.

Nia Sharma is an Indian television actress. She played in EK Hazaaron Mein Meri Behna Hai as a Manvi. She participated in Fear Factor Khatron Ke Khiladi session 8 in 2017. She was the top finalist. She ranked Number 2 in 2017 and Ranked 3 in 2016 in the Top 50 sexiest Asian Women published by British based Eastern Eye Newspaper. She earns Rs 1 lakh per episode.  She started as Aarohi Kashyap in Ishq Mein Marjawan and currently portraying Brinda in Naagin-Bhagya Ka Zehreela Khel. Nia Sharma shot to popularity with the web series Twisted.