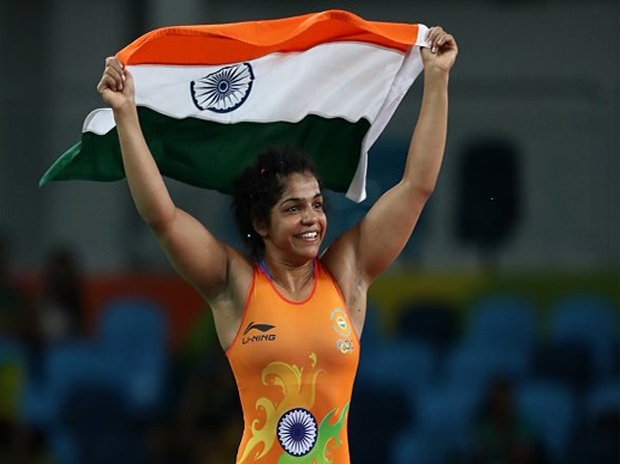 A diminutive 23-year-old girl from Mokhra village near Rohtak in Haryana, Sakshi Malik, touched glory at the Rio Olympics on Wednesday by reaching out and grabbing the only medal India has been able to win at the 31st Olympiad.

What’s even more astonishing and historic is that she is the only Indian woman wrestler to have ever won a medal at the Olympic games.

Sakshi brought an end to India’s long medal wait, when every hopeful had failed one by one. She clinched the bronze in the Women’s Freestyle 58kg category with a spirited comeback victory over Aisuluu Tynybekova of Kyrgyzstan.

The young wrestler overturned a 0-5 deficit in a hectic second round to script an 8-5 victory in the medal bout at the Carioca Arena 2 here.

“I have stood up to the hopes of the country for the first medal. I was confident that I can win in the end even being down. The last two hours were the most difficult for me thinking whether the medal will come or not,” she said in her initial comments soon after winning.

“This is the first time that a medal has come for women. It’s a success of my 12 years of dedication. My hard work has succeeded,” Sakshi said.

It was a rousing display of fighting spirit and never-say-die attitude from the Indian.

Aisuluu was clearly the superior wrestler in the totally one-sided opening round, displaying impressive strength and technique to take five points and open up a formidable lead.

But Sakshi — who has previously shown a knack of staging strong comebacks — was a totally transformed grappler in the second round, taking eight consecutive points to send the substantial number of Indian fans in the stands into wild delirium.

Kaori Icho of Japan won the gold medal in the category while Russia’s Valeria Koblova — who had defeated Sakshi in the quarter-finals — took the silver.

Eight-time African champion Marwa Amri of Tunisia took home the other bronze medal in the category.

Icho also created history by becoming the first-ever wrestler to win four Olympic titles. She is also the first female in any sport to win gold at four Olympics in an individual event.

Sakshi’s medal capped another day of heartbreaks for India including an unfortunate injury to Vinesh in the women’s 48kg Freestyle category that forced her out of the competition.

“To those who told me I am a girl and I could not wrestle, I want to say please show some trust in girls, they can do everything,” she said.

Later, at an impromptu press conference, Sakshi was asked if she was still feeling the pain from the battering during the match. “After the medal all the pain has gone. If I had missed the medal, all the aches would have shown up,” she said beaming.

“I was confident till the end that the medal was there and I told myself, you have to fight. That’s why I attacked again and again succeeding after a lot of effort,” she said, adding that the medal was dedicated to “every person who helped me along, my parents, my coaches and my training partners.”

She said she was disturbed and her mind got diverted when Vinesh, her wrestling colleague, was injured in another bout and had to be carried away on a stretcher. “But then I thought I must redouble my efforts to get a medal which she would also have got.”

She broke out in applause “yayyyyy,” when someone told her that her name would now be taken in the same breath as Yogeshwar Dutt and Sushil Kumar, the earlier bronze medal winners.

“When I used to see them I was in awe how I would be able to even train with them. My idols have been men like Sushil Kumar who paved the way for our success,” she said.

Right from the beginning, the Kyrgyz grappler displayed impressive strength and was more active in the opening stages which forced Sakshi to go on the defensive.

However, the referee invoked the passivity rule against Sakshi which handed the Kyrgyz the first point.

Aisuluu then made a successful takedown to bag another two points. Aisuluu continued to pile on the pressure and bagged another couple of points with another successful tackle to build up a healthy 5-0 lead at the break.

Sakshi made a superb comeback in the second round, turning a defensive position into an offensive one to bag two points before flipping the Kyrgyz over to bag another couple of points.

With the momentum firmly behind her, Sakshi continued to pile on the pressure before drawing level with another two-pointer.

With just seconds remaining in the bout, the Indian pulled off another takedown to take the lead and make sure of the win.

There was a visible sigh of relief among officials and coaches. Her coach of eight years, Kuldeep Singh said his heartbeat had increased after she was five points down, “as they were of all Indians.”

He said he told her during the break that she should “untwine her fingers from the opponent and go for her legs. She did that and gained two points and then went on to win a match.”

He said her strength lay in her ability to attack with both the legs. “I had a lot of hope before the match, and I kept on telling her the medal was hers to take.”

The Indian chief coach by the same name, Kuldeep Singh, said that the bronze medal match was the best one because she showed her true value by coming back from a very low point.

“During the break we explained to her the mistakes she was making. The opponent was placing the weight of her body on Sakshi without moving her legs. So we advised that Sakshi should divert her weight and attack her,” he said.

Earlier, Sakshi had crashed out of contention for the gold medal after a one-sided 2-9 loss to Valeria in the quarter-finals. Sakshi, who trailed 0-1 after the first period, made a comeback in the initial minutes of the second period to go 2-1 up.

She, however, failed to maintain the lead as the Russian overpowered her with some incredible moves to take an unassailable 9-2 lead in the dying minutes. But with Valeria later making it to the final, Sakshi qualified for the repechage round for a shot at the bronze medal.

She started her bid for the bronze in superb fashion by defeating Orkhon Purevdorj of Mongolia 12-3 in the Repechage Round 2 to move within striking distance of a medal. The Haryana wrestler was too superior for the 22-year-old Mongolian and dominated right from the start.

Sakshi grabbed the early advantage and effected a takedown to take a 2-0 lead. But a loss of balance from Sakshi allowed the Mongolian to take two points and make a comeback. Sakhshi did catch Orkhon off-guard with an arm-lock towards the end of the first round, but could not capitalise on that.

Sakshi grabbed the initiative right at the start of the second round, baging two points with double leg hold.

But Sakshi’s efforts to preserve her lead by decreasing the pace cost her dearly as the referee invoked the passivity rule against her which allowed Orkhon to bag another point.

Orkhon then tried to go for a leg hold but Sakshi came up with an effective counter-attack to bring the Mongolian down before rolling her over to bolster her lead.

With a comfortable 10-3 lead behind her, Sakshi produced a strong finish by coming up with another take down in the closing seconds. Originally published on business-standard.com