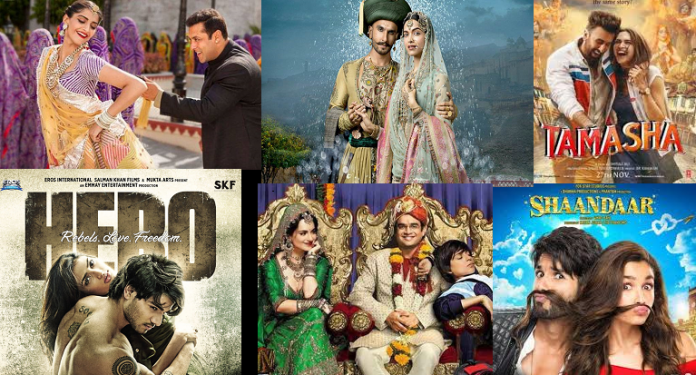 So you believe a lot in bollywood? Then this list of hits and flops Bollywood Films of 2015 is just for you.

Indian Cinemas have evolved over the decades, it has broken the stereotypical films that Bollywood was famous in the 80s and 90s and given its audience unique stories with a message, stories that touched the hearts, stories that provoked our humanity. 2015-16 has taken the Bollywood films to a whole new level. With films like PK which was intriguing, thought provoking and of course controversial, the Indian cinema, even gave the epic Piku which broke the monotonous story line and showed the woman of GenX.

Yet again Bollywood was ruled by the queens, which gave a clear message that- “Why should boys have all the limelight?”. However with the female protagonist as the rising stars, we even had a bunch of films that couldn’t connect with the audience and turned out to be big time flops. Films like Bombay Velvet, Roy, Shandaar which had high expectations stoop down to massive flops.

There were even comedy genre movies that failed to bring a humor in their punches and disappointed their audiences a big time. However hits and flops are the two sides of the coin in the Bollywood industry, some films go up on cloud nine, whereas some films go up in smoke, yet there is one thing that Indian cinemas aim at- delivering entertainment to their loving audience.

It is impossible to ignore Bollywood and that is why we have brought the highs and lows of Indian cinema. From the flops like Tamasha, Katti Batti, Shamitabh to massive hits like Bajirao Mastani, Manjhi, NH 10 Bollywood has given some rocking films. This year’s films was a amazing blend of love story, family love, historical romance, rib tickling comedy, intriguing mystery and much more.

Bollywood shared films that had a touch of family love (Prem Ratan Dhan Payo), a heartbreaking love story (Badlapur), engrossing story (Baby) and hilarious comedy (Kis Kisko Pyaar Karu). We can’t tell you how much we have loved these films and we wish the Bollywood industry keeps delivering such fabulous stories that keep us all entertained. Take a look at our list of hits and flops Bollywood films 2015-16.

5 Unique Ways to Celebrate New Year Vacations Like A Boss

Mitchell USA Beauty Products – Because Beauty is Your Right